The United Conservative Party is distancing itself from UCP’s pub night at Brown’s Social House.

“I know now, and I do not share the despicable views of this group,” Williams wrote. “Had I known their values I would have requested that they leave as their hate is not welcome in our party.”

I was completely unaware of what ‘S.O.O.’ stood for. I know now, and I do not share the despicable views of this group. While we were in a public place, had I known their views I would have requested that they leave as their hate is not welcome in our party #ableg

A social media post shows members of the Soldiers of Odin posing for photos with Williams, as well as fellow UCP West-Henday nomination candidates Leila Houle and Lance Coulter.

“To be clear: Soldiers of Odin and their hateful views are not welcome in our organization,” Howlett wrote.

Houle also released a statement Sunday on Facebook saying she is “beyond upset.”

“As an Indigenous woman, I condemn — in the strongest possible way –- the SOO, and the violent, racist activity they have been attached to in Edmonton and across Canada,” Houle wrote.

Jason Kenney was not at Friday’s event, UCP executive director Janice Harrington, confirmed Sunday. Kenney also took to Twitter Sunday saying he was ‘disturbed’ to learn the pub night event was “crashed by supporters of the fringe ‘Alberta Independence Party,’ including members of hate groups.”

The Soldiers of Odin groups were created in Finland, where they are considered a far-right, anti-immigrant organization. Members of the group in Edmonton have denied that they hold racist views, describing the group as a “neighbourhood watch-based activity.” 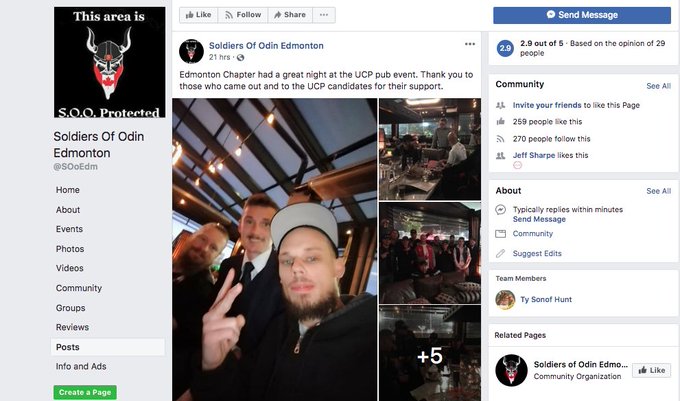 The Soldiers of Odin, a white supremacist vigilante gang, had a great night at the West Henday constituency association UCP pub night at Brown’s Social House on Friday night. They want to thank all those who came out and to the UCP candidates for their support. 1/x #ableg