By: Ross Vaughan
In: News

When we sold our lakeside home in rural Hastings Highlands (Pop: 4,078) a couple of years back to move to downtown Ottawa, the Canada Revenue Agency wanted to know when and at what price we had bought the home, as well as the amount for which it sold.

When the CRA suddenly wants details about the largest investment most Canadians will ever make, one’s sphincter muscle tends to tighten.

Despite denials, the Liberal government of Justin Trudeau — aka PM Blackface — stands accused by the Tories of plotting against us, led by Liberal Toronto MP Adam Vaughan, for eight years one of the more socialist members of Toronto city council, and one of the attack dogs who incessantly tormented the city’s late and troubled mayor, Rob Ford.

A Thursday ago, the Conservative Party of Andrew Sheer posted a tweet that probably answered why the CRA was likely digging for the information about the sale of our home, and likely the homes of millions of others.

The federal election is now only a month away, of course, so dirt digging is a big part of the game — especially this election.

“@Justin Trudeau and @TOAdamVaughan have a secret plan to tax the sale of your home at 50%,” it reads. “This is Trudeau’s secret agenda: tax hikes to pay for his massive deficits. You work hard, you increase the value of your home, and the Liberals take 50%. How is that fair? #NotAsAdvertised.”

@JustinTrudeau and @TOAdamVaughan have a secret plan to tax the sale of your home at 50%. This is Trudeau’s hidden agenda: tax hikes to pay for his massive deficits. You work hard, you increase the value of your home, and Liberals take 50%. How is that fair? #NotAsAdvertised 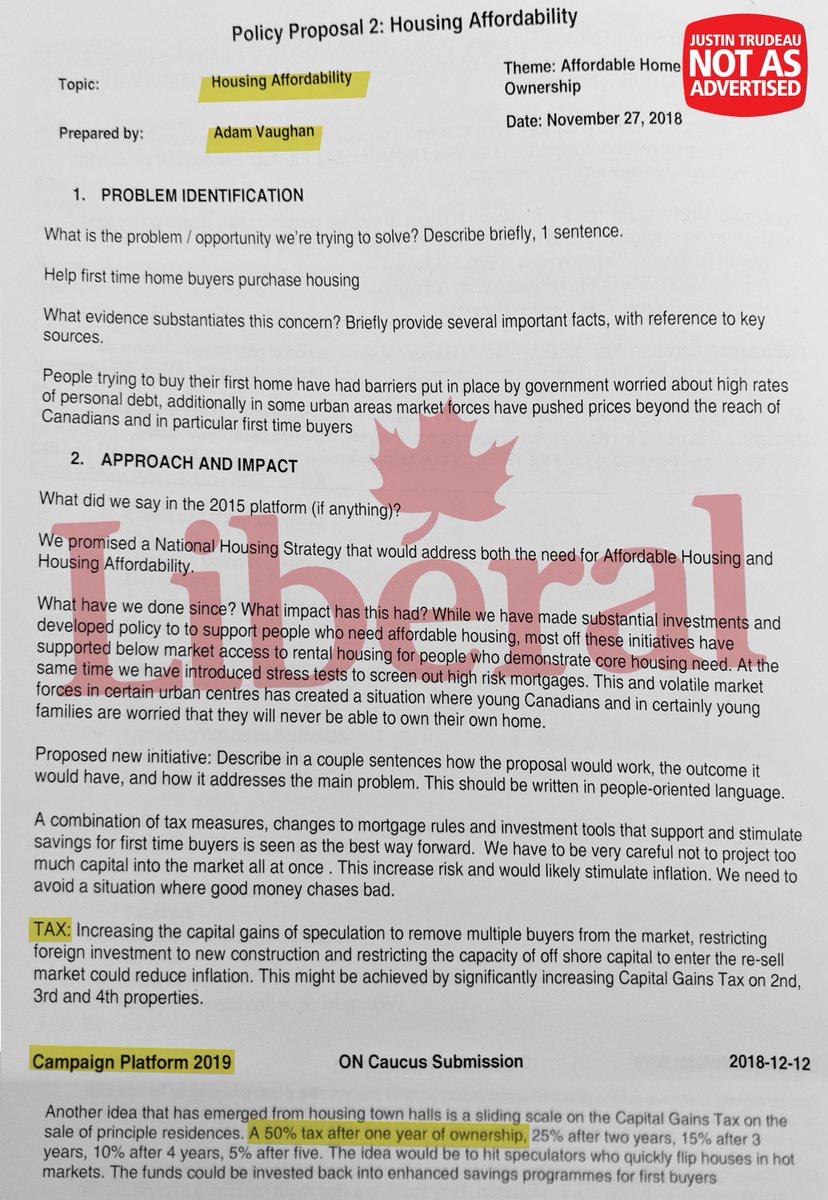 1,563 people are talking about this
Fifty percent would be criminal, of course. Even the sketchiest credit-card provider and those devious pay-day loan outfits aren’t that greedy.

But any tax on the sale of one’s main home would also be wrong, unless there was a business link.

Yet, if the Trudeau Liberals get re-elected, any of the profits people use from the sale of their principal residence to fund their kids’ post-secondary years, or to provide a cushion for retirement, could be cut in half in some cases.

The Tories even posted the Liberal document from 2018 outlining the plan.

Adam Vaughan was quick to call it hogwash.

Scheer was even pressed by the media whether he would apologize for the tweet, and stop flinging the accusation around, as if Adam Vaughan were suddenly the bearer of an undeniable truth.

But search out the tweet yourself, look at the Liberal document attached, and see if it rings true to you.

The attachment has a paragraph on “Campaign Platform 2019,” that reads: “Another idea that emerged from housing town halls is a sliding Capital Gains Tax on principle (sic) residences. A 50% tax after one year of ownership, 25% after two years, 15% after three years, 10% after four years, 5% after five.”

All the Liberals have admitted thus far is a 1% tax on non-resident non-Canadians to prevent foreign speculators from driving up housing prices to the point that the middle class is left out of the home-ownership dream.

If this is their only plan, and not their “secret one,” then why not a 50% tax on foreign ownership to put a stop to the mega-home purchases heating up home prices in cities like Vancouver, which are often a more subtle way of washing dirty money than lugging a hockey bag into a casino crammed with cash?