John McCain Passes Away At 81

Sen. John McCain (R., Ariz.), a Vietnam war veteran and Republican presidential candidate passed away on Saturday at the age of 81.

His office released a statement about his death.

“Senator John Sidney McCain III died at 4:28pm on August 25, 2018. With the Senator when he passed were his wife Cindy and their family. At his death, he had served the United States of America faithfully for sixty years,” the statement read.

Last July, the senator was diagnosed with brain cancer after doctors discovered a tumor during a medical procedure to remove a blood clot from above his left eye. In his final days, his family releaseda statement that McCain chose to “discontinue medical treatment.”

“I love you forever – my beloved father @SenJohnMcCain,” she tweeted. 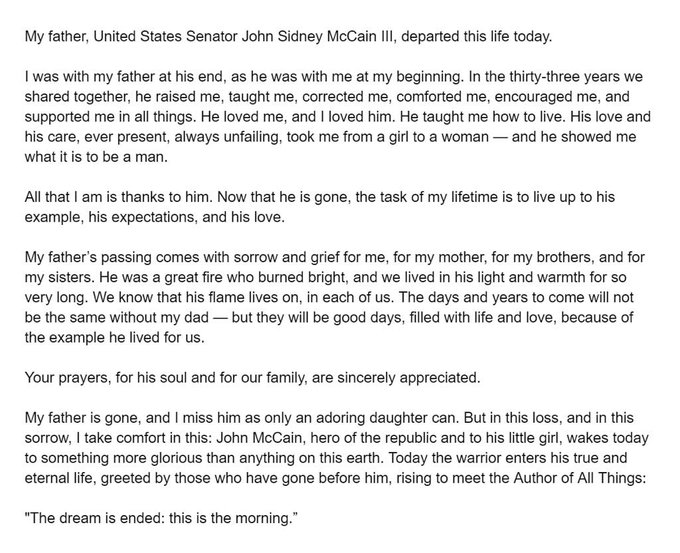 I love you forever – my beloved father @SenJohnMcCain

President Donald Trump also sent out a tweet, sending his sympathies to the McCain family.

“My deepest sympathies and respect go out to the family of Senator John McCain. Our hearts and prayers are with you!” Trump tweeted.

My deepest sympathies and respect go out to the family of Senator John McCain. Our hearts and prayers are with you!